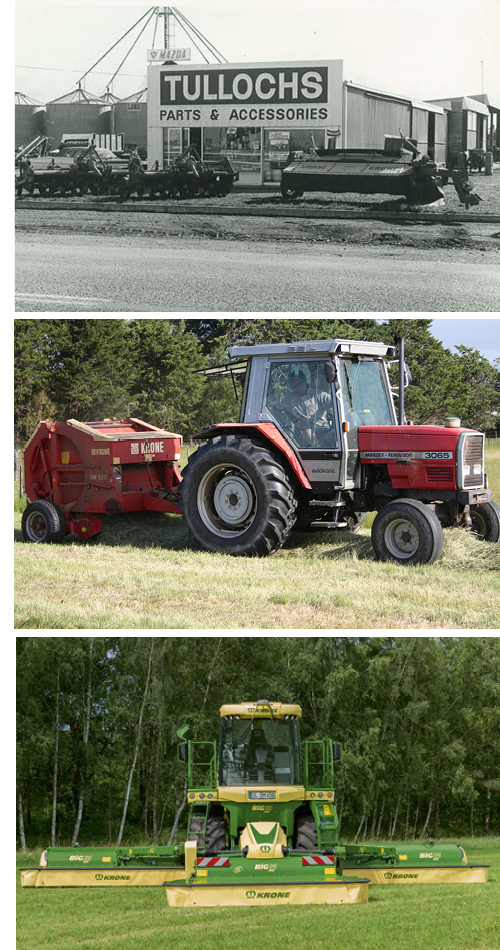 1965:
Began the manufacture of farm equipment, including Land-levellers, and Forage Wagons based on Gehl kitsets.

1968:
Graeme Tulloch appointed as Managing Director and the company changed direction; strengthening the local retail sales division and beginning the development of the company as an importer and distributor of farm machinery. The International Harvestor franchise for the Wairarapa (retail area) was secured. The company became the New Zealand importers and distributor for Gehl equipment.

1973:
The first national Tulloch Dealer Conference is held at Solway Park Hotel, Masterton.
1975:
The JF franchise secured for New Zealand and the first JF forage harvestors imported. Within two years the company secured 60% of the national market with JF & Gehl forage harvesters and became established as a leading supplier of grass harvesting equipment for the New Zealand market.

1980:
Manufacturing ceased to be a major enterprise of the company, emphasis being placed on adapting imported machines from overseas suppliers to better suit NZ conditions.

1984:
The company is sold to AIC International (formerly International Harvestor NZ Ltd. which in turn was owned by Australasian Investment Corporation).

1988:
Following the collapse in 1986 of the parent company (AIC) and the consequent pressure placed on TFM Ltd by that collapse, the company's directors requested that the major debenture holder appoint a receiver to run the company. The imported franchise lines remained personally with Graeme Tulloch.

1989:
Graeme and David Tulloch with other interested parties formed a company called "Tulloch Imports Ltd." purchased the assets of TFM Ltd from the receiver and began trading again as 'Tulloch Farm Machines'. The original franchise lines of TFM Ltd and those vested with Graeme Tulloch, are now exclusive to the new company.

1992:
Steady results in the initial two years after re-establishment, and growing confidence once again in the rural market sector saw rapid growth of the new company in its third year. The national dealer network was re-nurtured and the company was once more a major player in the New Zealand farm machinery market.

1998:
Graeme Tulloch retires and hands over to his son John Tulloch. John, an aircraft design engineer returns to NZ after living in Denmark for 13 years.